Expand All Collapse All 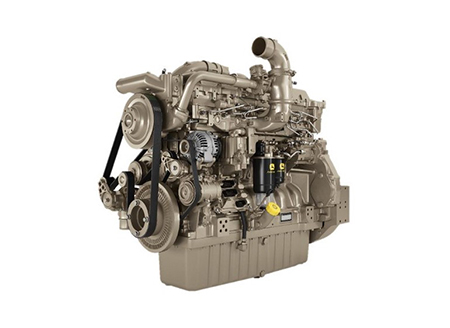 The muscle to handle heavy draft disks and rippers, power-hungry air seeders and planters, and large transport loads like grain carts and slurry wagons. The durable design and heavy-duty components you can depend on when you need to get in and get out. A dual emission strategy is available for Australia and New Zealand; the PowerTech 13.6L (827-cu in.) engine can be configured in either Final Tier 4 (FT4)/ Stage V or Tier 3/Stage IIIA compliant packages. You get real-world power with the purpose-built 13.6L (827-cu in.) engines from John Deere Power Systems, standard in the 291 to 440 engine kW (390 to 590 engine hp) 9 Series Tractors.

We developed our newest power plant from a clean sheet of paper, starting with stronger castings, beefier bearings, and more robust internal components, all designed to meet the high demands of field operations. We replaced the fuel injectors with a high-pressure common rail (HPCR) fuel system, and for FT4 configurations, eliminated the diesel particulate filter (DPF) to boost to fuel efficiency and lower operation and maintenance costs. Integrated coolant and oil passages, along with a new belt-driven water pump, eliminate potential leak points and allow for a less-crowded engine compartment, improving serviceability and reducing debris accumulation.

In redesigning the engine, we also gave it:

It all adds up to:

Visibility is more than just lighting. It’s mirrors where you need them, shades for the blinding late-fall and early-spring sun, wipers to help keep all the glass clear, and integrated camera capability right from the factory. The new 9 Series Tractors let you choose the visibility package that best suits your needs – Select, Premium, or Ultimate with 360-degree light-emitting diode (LED) lighting –so you and your operators can run with all-conditions confidence.

*Convenience lights illuminate the corners of the cab for easier entry and exit.

Put more power to the ground, more comfortably, with the industry-exclusive HydraCushion™ suspension 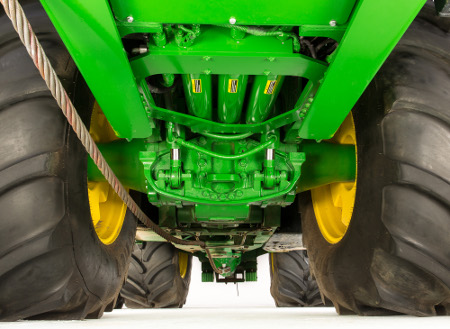 Power that doesn’t get to the ground is power that’s being wasted. And a bumpy, hoppy ride can quickly drain an operator’s energy and productivity. So to help you get the most from every horse under the hood and every hour in the cab, 9R Tractors in wheeled configurations are available with the advanced, industry-exclusive HydraCushion suspension (HydraCushion is standard equipment on 477-kW [640-hp] models).

Along with a proven-reliable suspension design, HydraCushion suspension uses an advanced system of electronic sensors and hydraulic components to keep the chassis and front differential vertically centered, giving you more consistent contact with the ground while reducing road lope and smoothing out the bumps that cause a rough, tiring ride.

In the field or on the road: adjust steering ratio on-the-go with ActiveCommand Steering (ACS™) 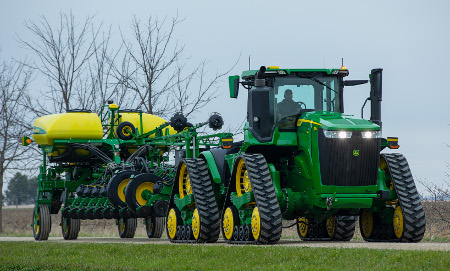 You don’t have to compromise between pinpoint turns in the field and smooth, easy steering during transport – you can have it all with ActiveCommand Steering (ACS), available on all 9R and 9RX Tractors.

ACS lets you choose your steering ratio based on the task at hand. For precise headland maneuvers in the field, choose a tight 3.5 turns lock-to-lock. When you’re done in the field, ACS gives you a full five turns for smoother line-holding during road transport. Variable-effort resistance automatically changes with ground speed; you’ll notice a lighter touch during low-speed, in-field turns, and increased feedback at transport speeds for more comfortable, confident steering over the road. Plus, ACS works seamlessly with AutoTrac™ guidance systems and is compatible with wide and narrow section width tires as well as wide and narrow belts on 9RX models.

The end result? Reduced overall steering effort and fatigue, no drift and no backlash through the hand-wheel, all with the “connected” feel of a traditional steering column system

John Deere integrated solutions: a world of connected technology, right from the factory 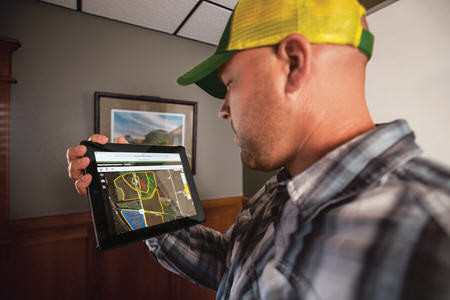 John Deere makes it easy for you to access an entire suite of connected applications, all designed to help you make the most of every seed, every hour, every gallon, and every bit of machine-related information.

Each 9 Series Tractor comes standard with the John Deere StarFire™ 6000 Integrated Receiver and Generation 4 CommandCenter™ display; there’s no need for setup, installation, or initial global positioning system (GPS) calibration. Integrated AutoTrac™ assisted steering gives you accurate, scalable guidance for low-stress operation in nearly any conditions and can improve field efficiency by 10 percent or more. The 9 Series Tractors also feature standard JDLink™ telematics and five years of connected service for anytime, anywhere access to critical machine and field information. And every tractor comes from the factory with John Deere Connected Support™, so you and your dealer can anticipate and address critical system needs.

From here? The sky’s the limit. Choose any of our operation-specific applications to help maximize efficiency and productivity during planting, tillage, or other field activities.

Work at your best with 9 Series Comfort and Convenience packages 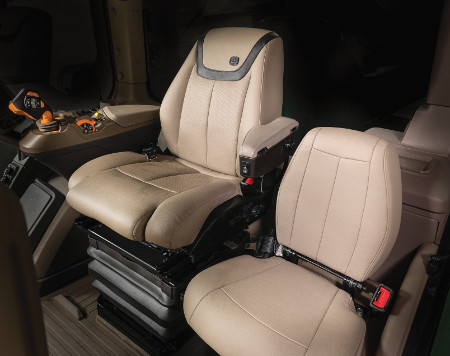 When you’re spending dozens of hours per week in the cab, a comfortable operating environment isn’t just an option – the right features, in the right places, let you and your operators work at your best, dawn to dusk and beyond.

The 7, 8, and 9 Series Tractors offer three Comfort and Convenience packages to fit your needs: Select, Premium, and Ultimate. But regardless of which package you choose, you’ll still get the John Deere CommandARM™ console that puts critical controls within easy reach. You’ll get all the storage space you need for drinks, meals, and other stowable items. And you’ll have plenty of outlets to keep your electronics powered.

NOTE: XM not available in all geographical regions. 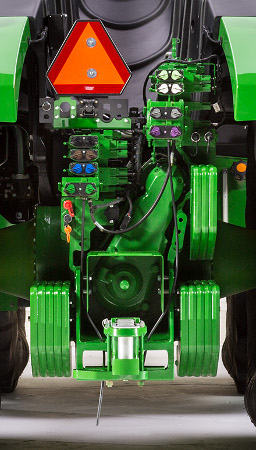 Of course, the 9 Series has the hydraulic muscle you need to push, pull, lift, and power your most demanding implements. But thanks to a range of enhancements to the hydraulic system, these tractors can provide that power at lower engine speeds, saving you fuel while still giving your implements the capacity they need. Regardless of model or configuration, the new 9 Series hydraulic system gives you:

And if you depend on implements that need continuous hydraulic power, the 9 Series Tractors are available with Intelligent Power Management (IPM). Using dual pumps and advanced sensor and control technology, IPM provides additional engine and hydraulic power for high-demand applications like air seeding up and over hills or through thick, tough soil.

Add in single and dual pump options and a flexible number rear SCVs, and you can configure a powerful, fuel-efficient hydraulic system to meet the demands of your specific operation without paying for capacity you don’t need.

The new 9 Series: Easy to run, easy to maintain 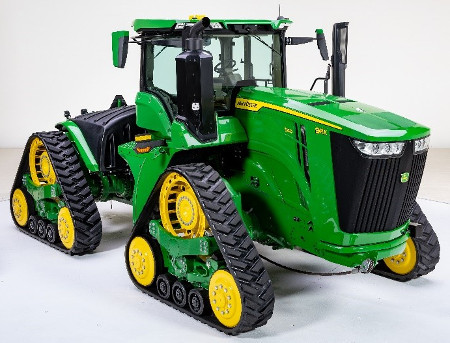 When you’re trying to get a field planted before weather moves in, there’s no time to hit a scheduled maintenance interval or get smacked with an unexpected repair. That’s why we designed the 9 Series for maximum reliability and less in-season maintenance.

To start, we simplified as many systems as possible, using components common to other tractor lines and minimizing potential downtime due to parts availability. Then we eliminated as many potential pain points as possible through changes in the cooling, aftertreatment, and diagnostic systems, including:

Cummins is a trademark of Cummins, Inc.